At the time when I followed Grandmaster Ip Man in learning Wing Chun, Ip always emphasized on the important of [Elbow Force]. Therefore, I believe, for those Wing Chun followers who had been personally taught by Ip, should have heard and seen the explanations and demonstrations of the purpose of [Elbow Force]. For those who have not fully understand [Elbow Force], only concentrate on the usage of [Elbow Force] with Tau Sau and Bong Sau and neglect the fact that [Elbow Force] can be used with any techniques in Wing Chun. 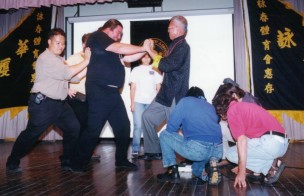 During all these years at the seminars that I have done all over the world, I always demonstrated the skill of the [Elbow Force]. The most remarkable one was in 1986 at Adelaide in Australia when I demonstrated the Wing Chun stance on one leg. At that time, I was pushed by three westerners from the same direction towards me when I was standing on one leg. My stance was not affected by their pushing. Again on the 5th of November 1999 at the 1st World Ving Tsun Conference organized by the Ving Tsun Athletic Association, two heavy foreigners joined together to push towards me. This time, I stood on a scale and could transfer their force and it showed on the scale that I was about a hundred pounds heavier. (As shown in the photo above.)

Another time, it was the 12th of June 1994 when I had a seminar in Holland. I used the [Elbow Force] in the Chum Kiu technique and overpowered a young Negro. (The youth has a huge physical build and has a nickname of Black Mountain.) This display obtained the shouts of triumph from everybody present on that occasion.

Unfortunately, those followers of Wing Chun who do not understand the Wing Chun Kung Fu deep enough had later criticized the skill of the Wing Chun [Elbow Force] I had demonstrated as acting. This is really laughable.